His Way At Work Colombia registered as a company

His Way At Work Colombia registered as a company

On October 12, 2016, His Way At Work Colombia was officially a registered company as a result of the growing need in that country to formally establish His Way At Work as an entity with a support structure which includes a Board and an Executive Director: Rafael Polo.
The first time His Way At Work visited Colombia was in 2013. Raul Arias and Nhora Martinez (his wife), Jorge Ordoñez and Andreina Hermosa (his wife), Libardo Mejía and his wife Claudia Suarez organized the first ever HWAW presentation to around 200 Business Leaders in Bogota to hear the story of HWAW founder Peter Freissle, HWAW board member Roberto Sanchez-Mejorada and HWAW Business Leader Fernando Garcia (RIP).
“We couldn’t believe how it all came out so nicely in so little time,” said Nhora Martínez, one of the organizers. “We worked very hard but the outcome was dis-proportionally positive, only God could make it happen that way.”
Since then, His Way At Work has stayed in touch with the organizers in Colombia, some of whom eventually became HWAW Colombia board members, namely Raul Arias and his wife Nhora Martínez, Rafael Polo and his wife Marcela Méndez, Jorge Ordoñez and his wife Andreina Hermosa.
Libardo Mejía, supported by his wife Claudia have also played a key role in the development of HWAW Colombia from the beginning. Libardo was the first to get trained on the HWAW processes to then go back to Colombia and begin promoting HWAW amongst CEO’s and companies. More recently, the board has added Alejandro Cheyne, Dean of the Business School at El Rosario University in Bogota who also brings expertise and sound advice to HWAW Colombia operations.
His Way At Work has visited Colombia several times and has evidenced the hand of the Lord working in the hearts of Business Leaders. The first Business Leader to venture into practicing His Way At Work into his company was Andrés Camargo (PREVEO) who was first inspired by The Business Card book and with what he learned in the 2013 HWAW conference.
In 2014, exactly one year after the 2013 conference, HWAW visited Andrés Camargo, his wife Montserrat Mayol, and the rest of the company to observe their progress. Scott Gajewsky, HWAW Board Member, was ecstatic to see how much PREVEO had accomplished in caring.
Through Andrés Camargo, HWAW was also introduced to the Juan Carlos Afanador, CEO and founder of Geotecnia & Cimentaciones (G&C), and his wife MariJose Izquierdo. G&C, together with Outsourcing (with CEO and founder Ricardo Durán with 2,300 employees) were the first companies in Colombia where HWAW started the coaching process with the support of Certified HWAW Coach Sergio Duque.
G&C and Outsourcing became the model for other companies to follow. Several other companies have since then joined HWAW in Colombia. Recently, HWAW Board Member Alfonso Gonzalez (Qualfon founder), with the support of Fr. Juan Pablo Álvarez, and together with Juan Carlos Afanador, Ricardo Durán and Andrés Camargo, presented to a group of 200 Business Leaders.
HWAW is also currently coaching PEDELTA (Leonardo Rosillo)  and is in the process to support a couple more companies soon.
HWAW also welcomed two new Certified Coaches in Colombia this year: Danilo Raymond and Iván Díaz and on November 1, we were invited to present to a group 15-20 business leaders in Cali where the local auxiliary bishop Juan Carlos Garrido blessed the event. Fr. Octavio Lara was also supporting and Juan Carlos Afanador came along to present his testimony. HWAW Certified Coach Danilo Raymond presented the HWAW model.
On behalf of the HWAW team, we want to congratulate and praise His Way At Work Colombia and the fabulous people that made it possible. You are an inspiration to us all.

His Way At Work presents at Lumen Institute in Chicago

HWAW presents at Business On Mission in VA 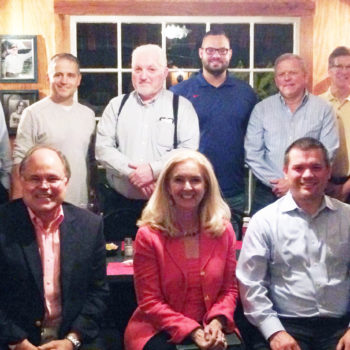